Did you know your skin has receptors for CBD? That’s right, but don’t confuse CBD, or cannabidiol, with THC, the psychoactive component of cannabis. CBD has been studied extensively for its therapeutic properties, and doesn’t cause the “high” that THC does. Cannabidiol is legal in all 50 states, and is becoming increasingly popular as an ingredient in personal care products. Here are 5 reasons to use CBD oil on your skin. 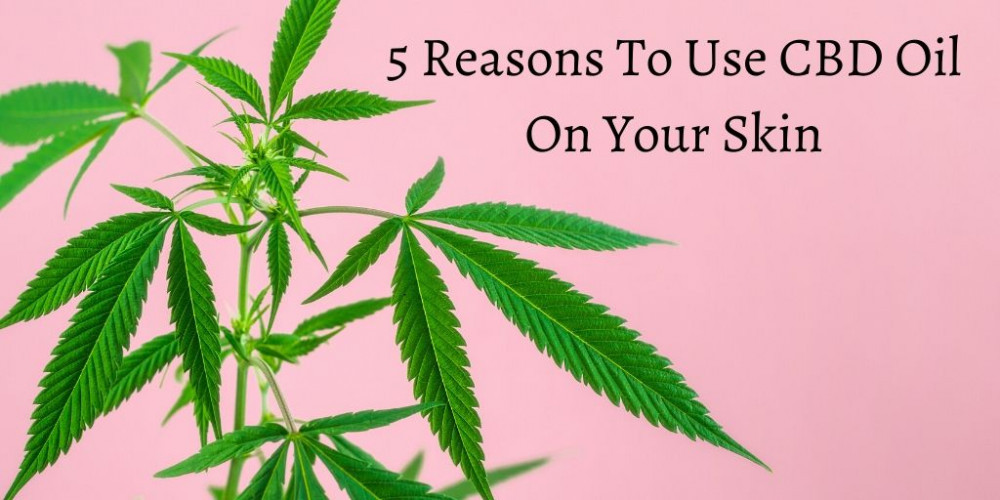 Cannabinoids, including CBD and THC, help to modulate the endocannabinoid system in the human body by enhancing the effects of our own endogenously made cannabinoids. The discovery of this system was announced in 1990 at the National Academy of Science’s Institute of Medicine where Lisa Matsuda and her colleagues at the National Institute of Mental Health announced they had pinpointed the DNA sequence that encodes for cannabidiol receptors in the brains of rats.

She stated: “People have the same receptors, which consists of 472 amino acids strung together in a crumpled chain that squiggles back and forth across the cell membrane seven times. Cannabinoid receptors function as subtle sensing devices, tiny vibrating scanners perpetually primed to pick up biochemical cues that flow through fluids surrounding each cell.”

Scientists have discovered that the endocannabinoid system (ECS), when not functioning correctly, is implicated in most pathological conditions, being either chronically deficient or overactive. Cannabinoids have been found to impede, and in some cases halt disease progression, by modulating endocannabinoid tone. When applied topically, CBD oil interacts with cannabinoid receptors in the skin to exert its beneficial properties.

Benefits Of Applying CBD Oil On Your Skin

Because CBD oil is a powerful anti-inflammatory, it soothes and calms inflammatory symptoms of acne, such as redness, irritation, sensitivity, and breakouts. It is also thought to reduce the production of excess sebum or oil, a known contributing factor to acne. Cannabidiol is able to exert its therapeutic effect by locking onto receptors in the skin. Its efficacy is likely due to its ability to promote homeostasis.

Eczema and psoriasis are chronic inflammatory autoimmune conditions characterized by rashes, itchy scales, and dry patches of skin. The endocannabinoid system that I referred to above plays a vital role in controlling inflammation. Both disorders are fueled and exacerbated by inflammation.

CBD oil promotes healing and reduces inflammatory flare-ups by modulating the endocannabinoid system. This system plays an essential role in the regulation of hormone production, and skin proliferation and growth, namely the proliferation of keratinocytes, cells within the epidermis which produce keratin. A buildup of keratin underlies the development of psoriasis.

CBD has antifungal properties, making it a good remedy for infections of the skin caused by fungus, including yeast infections, ringworm, athlete’s foot, and tinea versicolor. Unfortunately, fungal infections are quite common, are uncomfortable and unsightly, and can be intractable. Symptoms include scaly, red rashes, itching, burning, and stinging sensations, along with skin that cracks and blisters.

While there isn’t a lot of clinical evidence documenting cannabidiol’s effect on fungus, there is a body of anecdotal evidence suggesting that it may be a significant fungicide. When using CBD topically to fight fungal infections, look for a full-spectrum product that contains other cannabinoids and terpenes, rather than a CBD-isolate. Terpenes are lipophilic substances that are capable of disrupting cell membranes. This disruption causes cell death, and inhibits fungi from proliferating. 3. Diminishes The Signs Of Aging

The anti-aging industry is a billion dollar business. Everyone is looking for a way to slow aging and the visible signs that accompany it, namely fine lines, wrinkles, uneven skin tone, pigmentation, and a dull complexion. CBD has impressive antioxidant properties, which makes its fantastic for anti-aging in its own right. Not only does it quell inflammation in the skin, it also combats damage caused by free radicals, which are unstable atoms that damage cells.

Free radicals are produced endogenously via normal metabolic processes or externally from UV radiation, environmental toxins and pollutants, and smoking. They damage DNA and cause oxidative stress, which is the result of an imbalanced ratio of antioxidants and free radicals. CBD oil applied topically enhances the body’s own production of antioxidants, while neutralizing free radicals and inhibiting the degradation of collagen.

You can’t win for losing if you have dry skin. Winter dries it out, and if you live in the desert like I do, so does summer. Sun exposure doesn’t help matters, nor does the fact that we lose moisture as we age as a result of reduced oil production. A lack of moisture in the skin makes you look and feel older than you are. It can also make your skin feel taut, flaky, and itchy.

Cannabinoids lock onto receptors within the endocannabinoid system, a key regulator of homeostasis, or balance, in the body. In fact, the ECS is called “the universal regulator.” This system is ubiquitous throughout the body, and has a wide scope of influence. In fact, it is the largest biological system of receptors in the body that have both stimulatory and inhibitory roles based on the amount of incoming cannabinoids.

Any remedy that is applied topically has the potential to be more effective than oral preparations because it doesn’t have to go through the liver.  CBD oil is gaining traction for its ability to provide pain relief of inflamed joints and muscles, arthritis, headaches, and neuropathy. Cannabidiol works quickly to fight inflammation at the source, making it ideal for rapid pain relief.

Cannabidiol is a potent anti-inflammatory, and has the added benefit of reducing the anxiety that is part and parcel of pain syndromes. Clinical studies have not shown any serious side effects correlated with CBD use. In the proper dosages, CBD  provides pain relief without the side effects, or dependency issues, commonly seen with opioids. Check out this CBD-infused cream.

When looking for CBD oil, make sure it contains “cannabidiol” as the main ingredient. The amount of cannabidiol will be listed in milligrams. Cannabidiol is not the same as hemp or hemp seed oil, which is a common misconception.  CBD creams, oils, and salves are amazing for soothing inflammatory conditions, diminishing the signs of aging, fighting fungal infections, and reducing pain. CBD comes in a convenient sublingual spray and is also formulated for pets.

If you love the products you’re already using, try adding a few drops of CBD oil to your existing creams and lotions, especially if you have any of the conditions mentioned above. Have you used CBD oil topically? What was your experience? Let me know in the comments:)

(1) Harvard Health Publishing: Cannabidiol (CBD) – what we know and what we don’t

(2) Beyondthc.com: The Discovery of the Endocannabinoid System

(4) Weedmaps.com: How Can CBD Oil Help With Pain Relief?

(5) healthline: Everything You Should Know About Oxidative Stress