Are tattoos safe? They certainly are pervasive, especially in certain subsets of society. Having worked at the jail for two years, I’ve seen my fair share of tattoos. Interestingly, it’s rare to see someone incarcerated who doesn’t have a tattoo. Why do people like tattoos and what are the dangers of painting your skin with ink? The History Of Tattoos

Tattoos have been around since the mid-1800s, but never before in history, have they been so prevalent. Previously common to convicts and sailors, tattoos have now officially entered mainstream society, with one third of the population sporting some variety of ink.

Tattoo lovers view their bodies as blank canvases begging for creative self-expression, and a means to display their interests, values, and beliefs. Are tattoos, at their essence, a form of empowered self-expression? They may very well be, just keep in mind the risks involved, and the social stigma surrounding this form of individual expression.

Those with tattoos rarely sport just one? I’ve seen people, where the majority of their bodies, are covered in ink. The more ink, the greater the risk.Tattoos are permanent, so before you commit, evaluate the reasons for your decision, weighing both the pros and cons in terms of aesthetics and risk. Never get a tattoo at someone else’s coaxing. The decision should be yours alone. What may be a fashion statement today, could be tomorrow’s regret.

Inks that are used for tattoos are not FDA approved. Furthermore, pigments are not approved for cosmetic purposes. What if I told you tattoo ink may contain the same pigments used to paint cars or used as toners for ink printers? It’s frightening to think about these toxic substances swimming in your bloodstream. If that weren’t enough, tattoo ink may be contaminated with bacteria and mold. And what’s further cause for concern is the fact that there is no identifiable method to ensure the ink is safe. It could be in a sealed container, and still be contaminated.

Water used to dilute the pigments may also be problematic if it’s not sterile.  The real kicker for me, though, is the possibility that the ink, especially red ink, may contain mercury and other heavy metals. Mercury is a known neurotoxin, and can damage the brain and nervous system. It it also linked with psychological disorders, and an array of physical symptoms.

Heavy metal toxicity is a factor in the development of chronic disease. Lead damages the organs and tissues,  negatively impacting the bones, kidneys, and reproductive system. Beryllium is a known carcinogen, meaning it’s associated with cancer, and can lead to lung disease. Arsenic causes chromosomal damage, and cadmium damages the kidneys and lungs. All these metals are commonly found in tattoo ink.

Allergic reactions are likely the result of unhygienic practices, such as using needles and other contaminated tools that aren’t sterile. Reactions may occur from the pigments in the ink, particularly red, orange, and yellow pigments. It doesn’t help matters that ink is not tightly regulated in the United States.

It’s usually thought that negative reactions happen right after getting a tattoo, but the truth is, these reactions can sometimes occur years later. Red, itchy, raised rashes, and bumps typically signal an allergic reaction, and can be treated with topical steroid creams. Besides the possibility of mercury poisoning, some tattoo pigments may contain other heavy metals to make the ink permanent, but are known to cause scarring, skin conditions like eczema, and allergic reactions.

To make matters worse, inks containing mercury may cause sensitivity reactions if the person has dental fillings with mercury, and if the ink contains p-pheylenediamene, severe reactions to hair dyes may result. The unpleasant swelling and itching from allergic reactions, can unfortunately, persist for years.

3. What About Scar Tissue?

Scar tissue build-up is an inherent risk associated with tattoos, and may present as keloids, granulomas, or small bumps that form around the tattoo, which the body perceives as foreign. Scarring isn’t caused by one condition only, but could result from the procedure itself, the healing process, or even tattoo removal. Scars may not become visible for weeks after getting a tattoo. There are things you can do to minimize scarring, such as wearing a bandage over the tattoo for a day or two, resisting the urge to scratch any scabs that may form, and preventing the tattoo from getting wet. Red, distorted, puffy skin, with distinct needle lines that are raised, are all warning signs to be aware of.

Check out this book for ways to manage scar tissue:

4. Tattoos May Cause Skin Infections

Tattoos can cause bacterial skin infections because the skin has been wounded. Infections delay healing, and can increase in seriousness if spread to other parts of the body. They should always be taken seriously because of the inherent risks involved. Impetigo, tetanus, staph, herpes, cellulitis, fungal infections, and warts are all infections that could potentially occur as a result of getting a tattoo. Hepatitis B, a serious liver infection, is transmitted via bodily fluids, making it possible to contract the disease if a dirty needle is used.

Hepatitis C, is another serious infection that attacks the liver, and is sometimes fatal. The disease is transmitted through unwise practices, such as reusing ink and needles. Best safety practices are imperative in preventing infections, allergic reactions, and scarring.Warning signs of possible infection, include fever, inflammation, swelling, tenderness, and bloody discharge from the areas surrounding the tattoo.

My favorite tool for treating infections is my OZONE GENERATOR. Ozone is a gas that kills pathogens, viruses, bacteria, fungi, and mold. It’s “anti” everything, and the best part is you can treat yourself at home safely and effectively.

It’s a good idea to let your doctor know about your tattoos before getting an MRI because intense burning, redness, and swelling in the area of the tattoo can occur. Although quite rare, uncomfortable reactions are a possibility, and even first and second degree burns in some cases. The reason tattoos are problematic, in regard to MRIs, is that they can react to the magnetic forces within the metals in the ink.

One particularly problematic metal is iron, which is highly magnetic. The good news is there are other diagnostic methods that can be used as an alternative to MRIs. People with pacemakers and metal implants should not use magnetic resonance imaging.

Questions to ask when considering a particular tattoo artist and parlor:

What about tattoo removal? It makes sense that if tattoos are fraught with potential health threats, why not get them removed? Unfortunately it isn’t that simple. The process of removing a tattoo is not without risk, and is a painstaking process.  Ironically, tattoo removal may be even more risky than getting a tattoo. The high probability of exposure to toxic chemicals isn’t worth the risk. The last thing you need is heavy metals roaming around in your body. 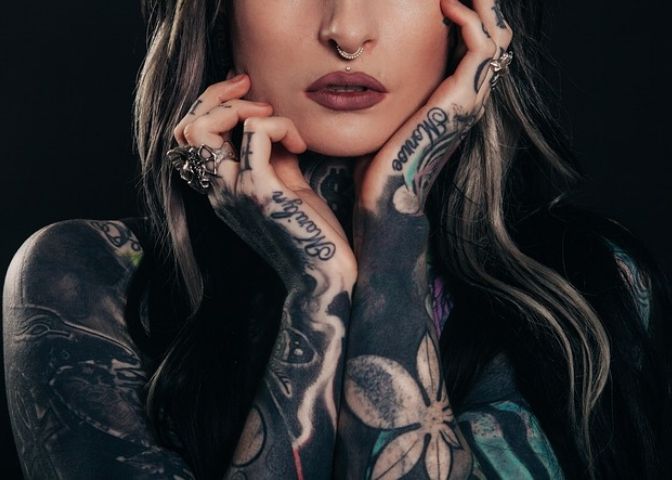 Laser removal isn’t much safer. In this technique, lasers dissolve the inks, which are broken down into toxic substances that can enter the bloodstream, damaging the cells and tissues of the body.

If you’re set on getting a tattoo removed, first talk to your dermatologist for safe-removal tips that can prevent infection and reduce scarring, which is not uncommon.

I’m not a fan of tattoos because of the potential health risks. If you do decide to get one, educate yourself on the possible dangers, and take your time finding an experienced artist and reputable parlor, in order to minimize the risk.

I would also consider getting testimonials from previous clients. Take time to weigh the pros and cons before you commit to something so permanent.

Have you considered getting a tattoo? Do you already have one and if so, what are your concerns? Let me know in the comments:)

(3) Consumer Reports: Tattoo health and safety tips – Don’t drink before you ink, and eight other tips

(5) US National Library of Medicine National Institutes of Health: The Journal of Clinical and Aesthetic Dermatology – Tattoos: what Do People Really Know About The Medical Risks of Body Ink?

(6) US National Library of Medicine National Institutes of Health: The Journal of Clinical and Aesthetic Dermatology – A New Era For Tattoos, with New Potential Complications

(7) US National Library of Medicine National Institutes of Health: Tattoos, inks, and cancer

8 thoughts on “Are Tattoos Safe? [5 Potential Dangers To Be Aware Of]”