Tea is becoming increasingly popular as people make an effort to decrease the amount of coffee they drink each day. Green tea, yerba mate, and kombucha are referred to frequently in the health arena. What is cistus tea? I bet you haven’t heard of it, which is unfortunate because it’s much richer in antioxidants, flavonoids, catechins, and polyphenols than green tea. Cistus tea is a powerful remedy that fights free radical damage and slows the aging process. 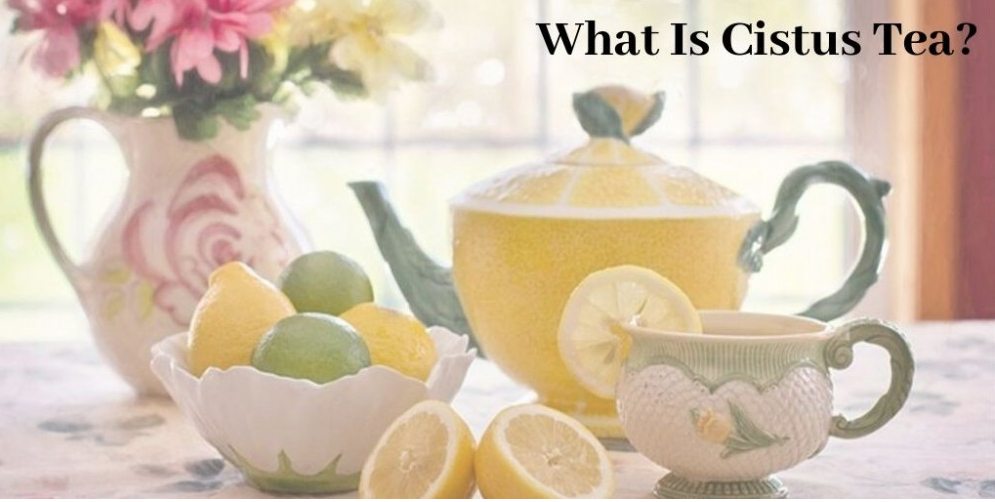 What Is Cistus Tea?

Cistus incanus, also known as Mediterranean Rockrose, is a flowering evergreen shrub that grows in Greece, Turkey and Italy. Its plentiful levels of polyphenols comes from its ability to survive the harsh, drought-like conditions of an arid environment with its hot temperatures and lack of moisture.

The tea has been used for centuries for its therapeutic properties. It contains numerous healing compounds, including polyphenols, catechins, gallic acid, rutin, adaptogens, proanthocyanadins, bioflavonoids, along with other beneficial bioactive compounds. It’s effective against a broad range of conditions due to its potent antioxidant and detoxifying properties, its ability to boost the immune system, restore the integrity of the gut, decrease inflammation, and eliminate microbes.

I first heard about cistus tea from Dr. Deitrich Klinghardt on a webinar about Lyme disease. The tea is able to break up biofilms, mucus-like encasements that microbes enshroud themselves in, as a protective mechanism. When biofilms are dissolved, the immune system can better target and eradicate infections. It’s common to have biofilms in the mouth, making cistus tea an incredible remedy for dental health.

Lyme disease is notorious for being difficult to diagnose and treat. This unmasking of infections is a significant factor in treatment efficacy. And because it’s anti-viral, cistus tea has been found to be effective against Ebola, the flu virus, and the deadly retrovirus, HIV. It’s also a therapeutic remedy for stress, anxiety, and panic attacks.

The tea has many other benefits, including healing leaky gut, fighting free radicals, eradicating viral and fungal infections, and slowing the aging process. It’s also a potent anti-inflammatory, is used in wound healing, and to treat chronic fatigue syndrome.

Cistus tea has powerful anti-fungal properties. Fungal infections of the skin are common, including yeast infections, such as candida, athlete’s foot, ringworm, and tinea versicolor. The anti-inflammatory and antioxidant properties of cistus tea make it a powerful remedy for inflammatory conditions like dermatitis and acne.

The tea boosts cellular rejuvenation, eliminates toxins, and reduces free radical damage, leading to a more radiant and younger-looking complexion. Free radical damage, or oxidation, is harmful for the skin, and visually shows up as deep lines and wrinkles. Cistus tea also:

How To Use Cistus Tea

Follow these directions when brewing cistus tea. The process is different from traditional teas:

1. Using one teaspoon of cistus tea leaves, bring 1 1/2 cups of filtered water to a boil.

2. Remove immediately once the water boils. Simmer the leaves for five to ten minutes.

3. Let cool. COVER continuously with a lid to preserve the valuable essential oils manoyloxides and labdanum, which are powerful anti-Lyme components.

4. Strain the tea into a mug and add a few drops of whole leaf stevia. Stevia is used, not just for its ability to sweeten, but also for its therapeutic effects.

5. Six to eight cups of tea should be consumed daily for acute conditions, less if using for general health purposes. The tea can be enjoyed iced or kept in the fridge and sipped throughout the day. It’s best to drink on an empty stomach. Tea can also be given to dogs. Simply mix a little in with their food to keep them healthy.

6. Rebrew the SAME leaves two more times to take advantage of the adaptogenic properties and polyphenols that were activated with the first brew.

Cistus tea can also be taken in capsule-form

It’s good to pace yourself when you first begin to drink the tea because it can cause a die-off, or Herxheimer’s reaction, which is caused by the destruction of microbes. Slowly build up to the recommended dose of several cups of tea per day.

Use a binder if you notice uncomfortable detox symptoms, such as fatigue, headaches, brain fog, sore throat, itching, GI symptoms, irritability, or a low-grade fever. A binder will mop up the toxins before they able to be recirculated. Chlorella is a great binder for capturing biotoxins that have been mobilized.

Cistus incanus can also be used as an extract. Consult with your healthcare provider when using the tea for acute conditions, such as Lyme disease and cancer. They can help determine how long the tea should be consumed. Cycle on and off the tea when using it preventatively or for wellness maintenance.

Here’s an easy cistus tea facial toner recipe. Use after cleansing and before you apply a moisturizer. Toners are incredible for, not only cleaning the pores, but also reducing their size, which will make your complexion smoother.

3. A few drops of your favorite essential oil (I like rosemary because it’s a natural preservative)

Put all ingredients into a small bowl and mix thoroughly. Use a funnel to pour the mixture into a small fine mist spray bottle. Shake well and spritz your face with the toner or apply with a cotton pad or ball. Tone both morning and night to keep your skin free of any blemishes. The toner is ultra-refreshing if you keep it in the fridge. It will also keep longer.

Simple to use, highly effective, affordable, and non-invasive, cistus tea is a foundational remedy for a wide range of conditions. Unlike other therapeutic teas, it actually tastes good. Cistus tea can be used preventatively or as a stand-alone antimicrobial. Any remedy that helps the body heal and repair, is also beneficial for the skin, since the health of the skin is a reflection of what’s going on internally.

Have you heard of cistus tea? Let me know in the comments:)

(1) Klinghardt Institute The Heart of Healing: Sardinian Cistus Incanus: A simple treatment of many – if not most – chronic illnesses?